Four score and five years ago
At one opportune moment, nary another,
Birth of a seedling-
The Gods hath witnessed with wonder.

Thus spake the King of Kings
“Lo and behold,
This here is a child
Who is to become humanity’s Gold.”

Seven years hath passeth
Since that glorious day,
The seedling is now firmly planted
With the clear intention to stay.

In company of Banyan trees
Or on old school benches,
Everyday the seedling learnt
And grew itself new branches.

Twenty years hath passeth
Since that rejoiced day,
And now the Shrub has become fascinated
By a Nightingale- and its grey.

Yet an impossible choice
It has to face,
Does it wish for the Nightingale
Or is it the moment of greatness which it is destined to embrace.

Thirty years hath passeth
Since that illustrious day,
The Tree now firmly entrenched
Braves the Storms like a child’s play.

Neither the Thunder
Nor can the Winds now wake
The countless nightingales
Who sing everyday of its great tale.

They rhyme and chirp about a Tree
That sacrificed its branches and a bird,
To stave away a ferocious Serpent
And saved an entire herd.

Many years hath passeth
Since that extra ordinary day,
The Tree well past it’s prime now
Has nothing more to wish or pray.

It just waits patiently
Knowing that time has come for its decay,
Very soon he shall be rejoined with the Nightingale
And this time for Eternity.

Our earth is one amazing planet. But we humans are a total disgrace to it. Sometimes I feel that humans as a race, should be obliterated from the surface of this beautiful lump of rock and water and Life.

This nature strives to endow us with spectacular sights and smells. The sun gifts us light. The stars alongwith the moon conspire to enchant us. But here we are- always wanting to obliviate all of these marvellous creations and do what we were never supposed to: Fight!

Senseless violence. Humans have fought over anything and everything. It’s as if we have some innate ability to do so. The most ironic thing to fight over is Religion. The one thing, which above all- teaches us Peace and Harmony and Brotherhood and Love. The thing which abhors violence. The thing that was actually meant to connect us. RELIGION.

Next we find ourselves fighting because of our skin colour. I can’t think of a reason which is thus bereft of reason. “Paint the world, not the skin”. I read this when I was a kid and even understood it then and now I am at a loss to understand how the learned men couldn’t get it right.

One more reason that we fight is, well.. um.. because our ancestors fought and their ancestors fought too. Silly, right?! Thus, today I want to ask this one simple question- Can’t we stop fighting ? Milleniums and milleniums have passed since the dawn of the first civilisation. Yet, sadly, we have still not garnered the qualities of Peace and Forgiveness, Forbearance and Patience.

We can do so much together and yet we choose to remain shut and cut off from each other. Let us usher in an era of freedom and  make this earth a kaleidoscope of awe and wonder. For a wise man once said, “United we stand, Divided we fall”. The scope of this should not remain limited to our family or community, but should encompass all humanity. And by doing this, we will have created a place, which can be equated with God’s own creations. 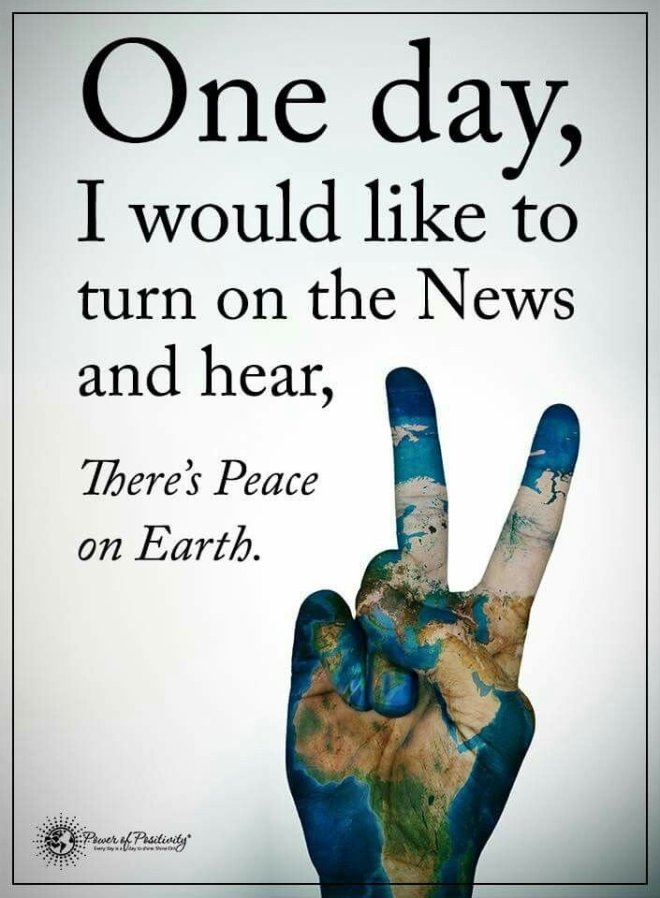 Well, most of the readers will obviously say a big NO. I mean, why take stress and bring home all the diseases which accompany stress. Only a fool would believe stress is not bad. And mind you, such fools do exist.

I am one among them. Personally, I believe that stress is as important in life as salt is in food. Just as food without salt is useless, so is life without stress. It is in moments of stress and pressure that the mind functions optimally. In fact, it would not be wrong to say that stress acts as a stimulus for greater efficiency.

Take any list which contains influential people. You will not find even one person in that list, who reached where he/ she is now before undergoing a period of stress and utmost pressure. There is an old adage which goes: every carbon molecule can get converted into a diamond, but very few, which take on the pressure finally become one.

However, just as a lot of salt can poison the entire food, similarly, a lot of stress can harm a person. One should not keep on taking stressful tasks one after the other. Stress is just a part of our life, and yet we tend to make it our life. This can have  serious implications across various dimensions of life.

To conclude, I would like to urge the fellow readers to remove the perception that stress has a very negative connotation. We must learn to use stress to our advantage. We need to learn, how to use it to navigate through unfavourable situations and turnaround our losses into our gains. And be very sure, this is quite possible. In fact, not just possible but rather probable!
Happy Reading !!

What do you do when you receive your paycheck ? You spend. You invest. You can do whatever you want to do- the whole world is yours.
Well, what did I do?

Kept half for me and distributed the half amongst my family –

Dad- not willing to take it at first, then taking it ceremoniously and again returning it back. It took a lot of convincing from me and mom before he finally placed it in his wallet. His face full of pride and eyes full of glory.

Mom- accepts it at once with grace and showers her blessings. Well, she earned that what she received. It has been her long cherished dream to spend money that her sons earn and even told the things she would buy out if it. #Mom things

Brother- well, obviously he earns more than me (infact he mints money even when he sleeps😋) so he refuses to accept the petty part of the already petty stipend that I earn and asks for the whole of it. But eventually, contents himself with the meagre amount. I’ll take a treat later on to square it off though !

Finally, I am left with my part. And what did I do? Initially, I tried helping an old man get some breakfast but he was too drunk for his own good . Then, I changed plan – I fed three children who were hungry (for I dont know how much amount of time). Seeing the happiness on their face and their mother’s was amazing. And what did it cost ? Not even a sum as paltry as a hundred rupees.

This brings us to the question – why did I do it? It’s simple, I did it because I am able to. Sometimes in life, we should do things not to get any particular benefits but just for the joy of doing it. The smiling “thankyou” that I received was worth more than the amount spent on purchasing foodstuff for them.

One more important thing- I did not want to write about any of this and would have loved to keep it off records but I have to write it down. I don’t want to brag about it. However, even if one person gets inspired and follows the suit, I think the purpose of this blog will be accomplished.

Remember, Karma has only one rule: what you do now, you will get it back later. So, next time whenever you see someone, who really needs a helping hand, DON’T hesitate because money spent on humanitarian causes is better spen,  than money spent on all the things we actually spend it on ( I don’t want to jot that list down😂😋).

” What goes around, comes around”.