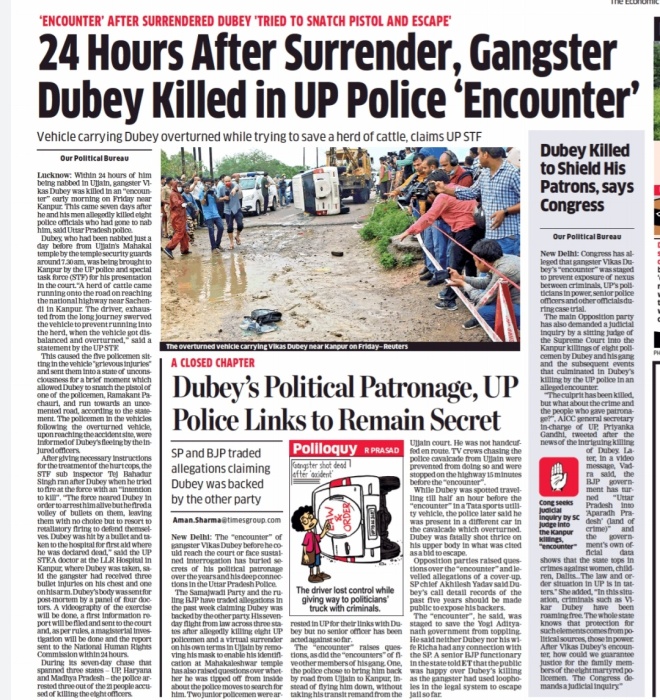 Yes, this is about the recent Vikas Dubey encounter case. A curious case, wherein people predicted an encounter ‘hours before’ it actually happened.

I have no sympathy whatsoever for this gangster, who killed 8 policemen a few days ago and had more than sixty similar cases on-going against him at the time of his death. Rather, I want to raise the more pressing topics such as the Rule of Law, failure of Criminal Justice System and abuse of power- and consequently Anarchy.

Now, I know that this is a very harsh word to use and that the main accused deserved to be punished with utmost severity, but is it not the prerogative of the Judicial System to mete out the sentence? Is our system so weak that even the police force itself believes that it is better placed to serve justice? The whole idea sounds preposterous and scary.

Public acceptance also doesn’t help much. Since when did we, as a nation, start rooting for police “hooliganism” – if it can be called so- notwithstanding the fact that people were relieved and happy at the news of his elimination. Has our Judicial System – one of the four pillars of our Democracy – failed so miserably that our society accepts such farce encounters (and that’s what this is), as Justice? Has it come to this, that Rule of Law can be thus mocked – so openly and so brazenly?

At this point of time, some might feel eager to question my sanity and argue that police has done the right thing and saved lots of time and funds, which would have otherwise gone into the accused’s trial. Yes, agreed that it does save time and money- but who is to guarantee that if not stopped now, someday this won’t come back to haunt us back. Rather than nipping it in the bud, we are allowing the seeds of anarchy to grow unchecked. We are supporting it, to say the very least. We have to understand that, what’s wrong is wrong and shall always remain wrong- whichever way we may try to justify it.

Another issue that comes to the fore right now is that if Vikas Dubey was such a dreaded gangster, then why wait till he kills other policemen? Are the lives of common citizens so useless that the man, who kills them, is not even put behind bars? Is this some kind of a joke that the police only wakes up when someone from the force is killed, but is ready to turn a blind eye otherwise ? I think, this is a question which each one of us needs to ask. Infact, these are the questions for which we should seek accountability.

Apparently, Vikas Dubey was a member of the Bahujan Samajwadi Party (BSP), which ensured that he could continue his illegal activities and yet get away scot-free. He is said to have direct contacts with the party office bearers and hence, most of the times, cases against him were not filed or were dismissed on the basis of farcical investigations. Conspiracy theories are abound that his encounter was as much a political move as it was an act of vengeance by the police department. Whatever may be the truth, now it has been buried as well and the case has been closed.

Now all we are left with is a dead gangster, who surrendered at first and then midway choose to flee, whose encounter was predicted hours before it actually happened and questions- lots of unanswered questions.

Reminds me of the old adage – justice hurried-truth buried!

In this journey of life, keep your eyes on the wonderful backgrounds. They pass by only once and if you are busy tredding on that worn road, then they are lost forever. View all posts by A Silent Spectator